As we move through December and the pre-Christmas period, the year is slowly coming to an end. Looking back, we can say that 2017 was an outstanding year for us through and through, with many achievements:

On November 30, we received an award in Stuttgart for our dual concept innovation that brings together the “mvBlueGEMINI” smart camera and “mvIMPACT Configuration Studio” software. Director, Uwe Furtner was handed the recognition award at the House of Commerce by Baden-Württemberg’s Minister of Economic Affairs, Nicole Hoffmeister-Kraut.

Just one week later, on December 6, we were presented with the “100 sites for Industry 4.0 in Baden-Württemberg” Award in the Old Castle in Stuttgart. The award, which, this time, was handed to Director, Erhard Meier, by Günther Leßnerkaus, Undersecretary in the Baden-Württemberg Ministry for Economic Affairs, honors innovative concepts that make a significant contribution to digital networking within the context of Industry 4.0. Here, too, it was our dual concept that once again won the day. 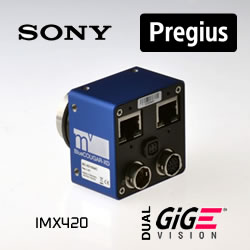 Sony is adding additional functions to the third-generation Pregius Sensors. A particular feature here is multi-exposure mode, which allows you to expose different image areas in different ways at the same time after a trigger event. The IMX420 has a pixel size of 4.5 µm and stands out thanks to its low readout noise and high quantum efficiency, while offering a broader dynamic range. We have integrated the sensor into the mvBlueCOUGAR-XD family with the following properties: 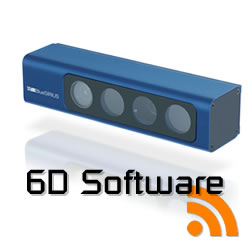 The new version 2.4.1 of the “mvIMPACT 6D” software package is now available for the 6D Perception Camera mvBlueSIRIUS. In addition to bug fixes, this also includes extensions to the mv6D API.

To ensure that you don’t miss a software update, we recommend that you subscribe to the RSS feed available for this. This and other RSS feeds are listed in the press area of our website.

Firmware 2.1 - With improvements and new features 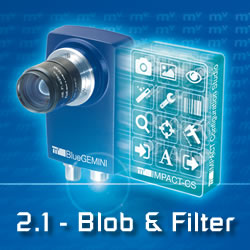 Release version 2.1 comes with a range of new developments. For example, three essential functions have been added to the “Measure object” tool:

In addition, the new release also features two further expert tools. While the “Filter image” tool makes it possible to optimize the image quality, under sub-optimal lighting conditions, for example, the “Check blobs” tool allows the user to detect objects in the image, count them and check the shape and other properties of those objects. 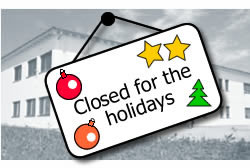 We would like to wish you a Merry Christmas and a Happy New Year!

Visit us in Birmingham (UK) at stand G46 and take a look at the mvBlueGEMINI Smart Camera - now available as color version - and mvIMPACT Configuration Studio. We will also be showing a preview of the mvIMPACT Configuration Studio (mvIMPACT-CS) as a PC standalone version for USB3 and GigE Vision standard cameras like our USB 3.0 camera mvBlueFOX3. The exhibition will be held from 26 to 28 September 2017.