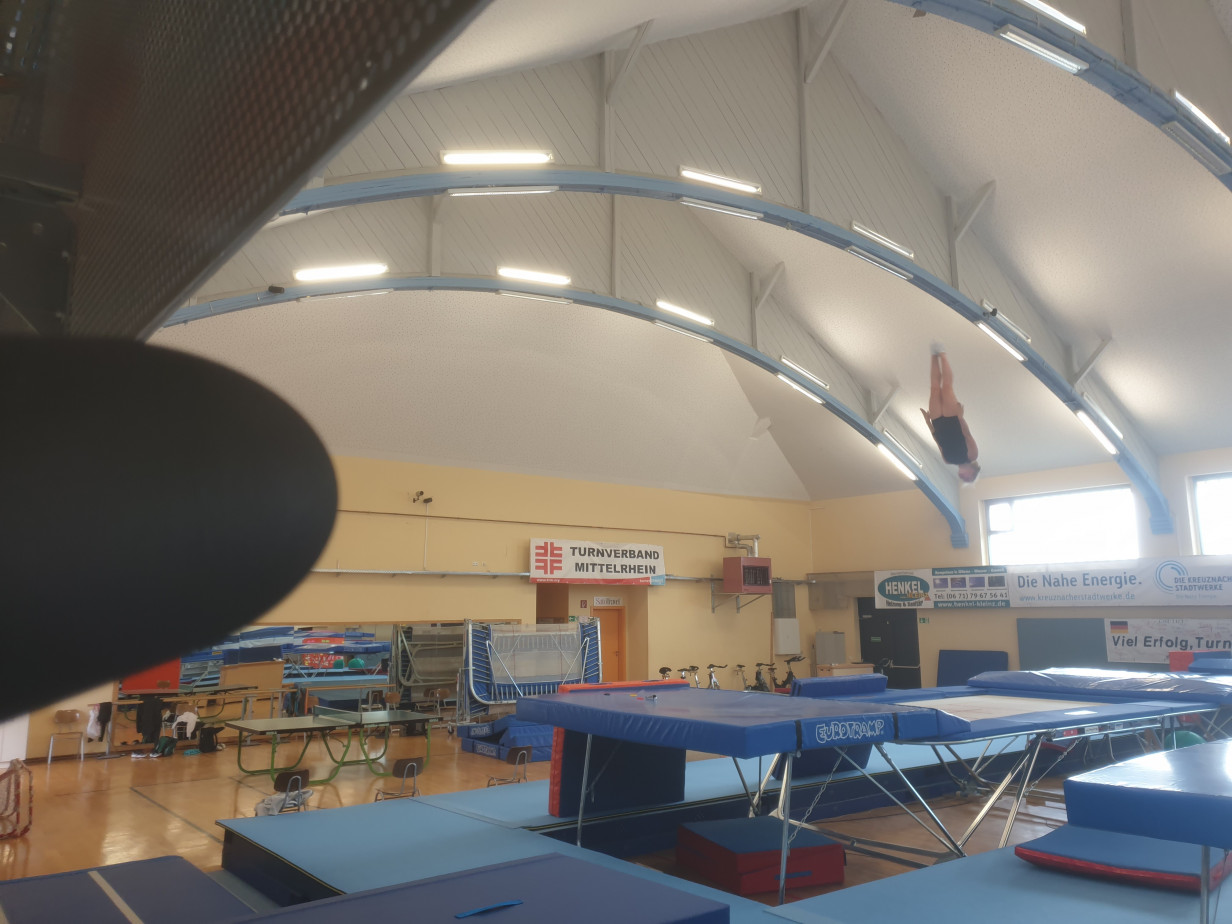 In top-level sport, talented athletes, motivated coaches and the right training environment are the basic prerequisites for delivering outstanding performances. However, when it comes to podium places, milliseconds and millimeters are crucial. These subtleties are to be visualized and documented for trampoline coaches and athletes of the German Gymnastics Federation in the future via a new project, which is based on an image-based system of the company Simi Reality Motion Systems GmbH, headquartered in Unterschleißheim. The appropriate video recordings are provided by industrial cameras from MATRIX VISION in Oppenweiler.

A concept for training improvement and documentation is the KISS, short for "KI-supported Srecognition and SThe German Gymnastics Federation (DTB) and the Institute of Sports Science at the Justus Liebig University in Gießen are working together on the "KISS" project in trampoline gymnastics. The aim of KISS is to use markerless tracking and artificial intelligence to differentiate between the execution of complex jumps in a squat, bent and stretched position and to quantify the quality of the jumps. To do this, the system needs suitable learning data. This data is provided by the existing training information system for trampoline gymnastics, which automatically records the exercise forms (preliminary exercises, individual jumps, jump connections and entire exercises), and by the measurement and information system (HDTS), which determines the quantitative characteristics (flight height, cloth contact time and landing/jump position on the apparatus). In the long term, individual learning progressions of the athletes are to be created from this and made usable for performance-controlling planning. This means that the previous individual training effect analysis will be extended to include the analysis of the training aids and training methods used and that the knowledge gained can be used for future intra-individual performance-controlling planning of the technique training for the squad athletes.

In the first step, eight to ten In the first step, video recordings of technically correct jumps from all perspectives are made with eight to ten cameras. The technically correct execution is based on the technical specifications of the international federation, is modeled as an optimum in the software and thus forms the basis of the video analyses of the jumps. In the second step, an automated temporal linking of the video recordings takes place. Here the jumps are recorded from different perspectives and synchronized with the data of the other training systems. In the third step, automatic jump recognition is performed. Based on the optimal video recordings of the jumps, the system automatically recognizes the current jump of the active person through markerless tracking and compares existing, known jumps in all three execution possibilities (squat, bent, stretched). In the fourth step, the deviations are analyzed. The current jump is compared with the optimum (shots in optimal execution and technical regulations), and at the same time the deviations are determined and evaluated (in the form of deductions based on the Code of Points). First, the coaching team as well as the judges will determine and evaluate the deviations, with the goal that the artificial intelligence will later be able to determine and output the deviations mechanically. The last step is the error analysis. Due to the variety and successive extension of the optimal and individual data, the machine evaluation and error analysis can be improved step by step by means of artificial intelligence methods (e.g. pattern analysis).

As a technology partner, the German Gymnastics Federation has brought on board the company Simi Reality Motion Systems GmbH; an expert in systems for movement and behaviour analysis "3D Motion Capture" with more than 25 years of experience. With Simi Shape 3D, Simi has developed software that captures the athlete's movement without any markers using the latest image processing and artificial intelligence algorithms and extracts a high-precision 3D model including joints. To do this, the software needs the data from several high-speed cameras. For years, Simi has relied on the robust and handy mvBlueCOUGAR-XD dual GigE industrial cameras from MATRIX VISION with a minimum requirement of 1920 x 1080 pixels, 100 frames per second and global shutter technology due to the fast movements. USB 3.0 would also be able to handle the data rates, but due to the distances between cameras and computers, only a network-based solution makes sense. What about a 10 Gig solution? With the mvBlueCOUGAR-XT MATRIX VISION offers a suitable solution. The advantage is obvious: Firstly, the new camera offers Power over Ethernet+ (POE+), which considerably simplifies the cabling of the camera system. I.e. from the original three cables per camera only one would remain. Secondly, the new camera supports the Precision Time Protocol (PTP) according to IEEE1588. This would enable precise synchronization of the eight cameras. Third, the new camera is based on the same driver foundation as the mvBlueCOUGAR-XD. That means Simi only has to adapt the code for image acquisition in a few places. In this way, motion and behavior analysis in 4K will be possible without any problems in the future.