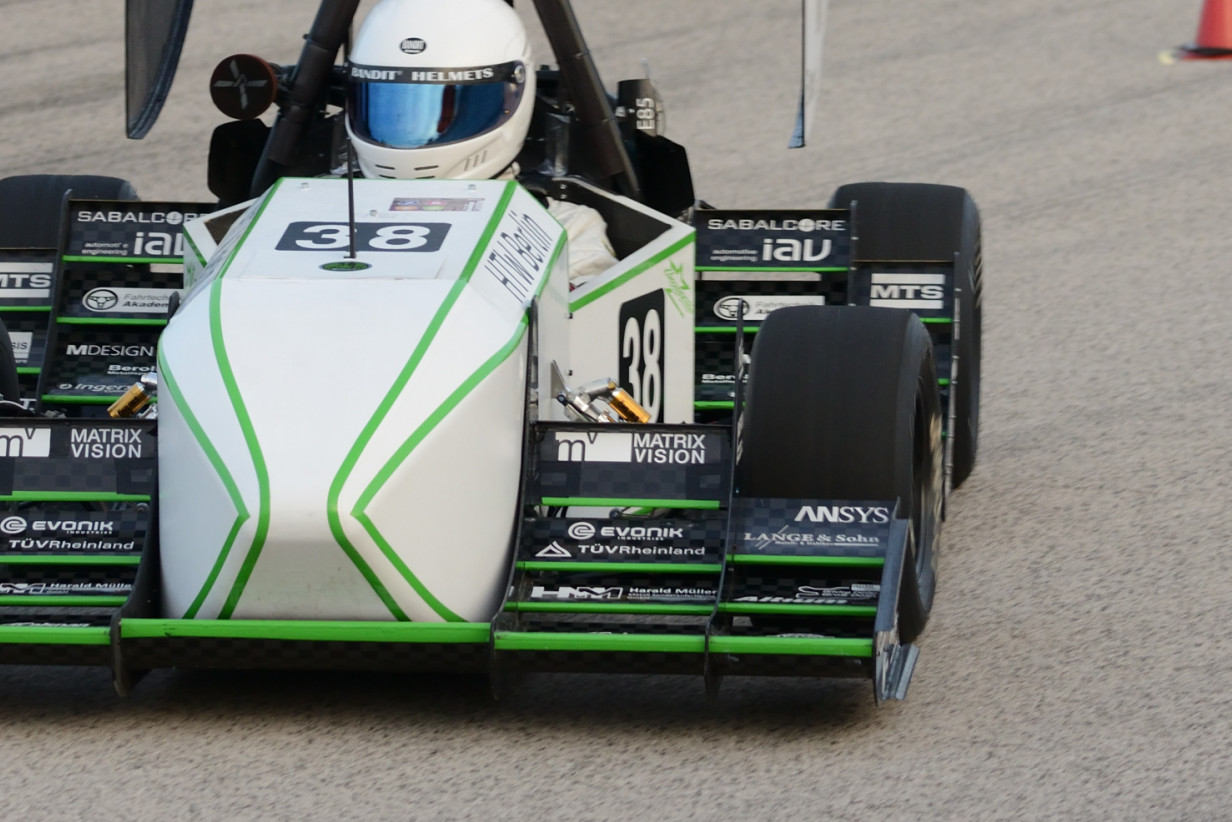 The Motorsport Team of HTW Berlin has been participating in the international student design competition "Formula Student" since 2006. For this, the students construct a racing car, the "Berlin Race Car", and have to qualify for participation in the individual competitions.

Of course, the race car should also drive fast, but the driving times are only one criterion. Before the car is allowed onto the track in the various disciplines, the team must defend its design in front of a team of experts, where the mechanical and electrical design is put through its paces.

Since 2017, Formula Student no longer only has the "Combustion" and "Electric" classes, but also the new "Driverless" class. In this class, the vehicle must drive autonomously in several disciplines. The track is marked by different colored traffic cones.

The HTW Berlin Motorsport Team has decided to participate in this new format. This is a huge challenge. A central point of an autonomous vehicle is its sensors. And among the sensors, optical sensors, i.e. cameras, play a central role.

Therefore, the motorsport team was very pleased that in 2017 the company MATRIX VISION provided a camera of the type mvBlueFOX3-2089a has been provided. The camera sensor Sony IMX267 has the necessary high resolution to be able to recognize the relatively small traffic cones even at a greater distance. The necessary image pre-processing is also already done in the camera.

The camera is equipped with a USB3 port to transfer the images with only a short delay and uncompressed to the control computer, an embedded system (NVIDIA Jetson TX2) running an Ubuntu Linux operating system as well as streamers, OpenCV and ROS (Robot Operating System) as additional software components. This central control computer is connected via CAN bus with further sensors, actuators and the engine control unit and sends operating data via WLAN to a base station.

The integration of the camera was easily possible thanks to the mvIMPACT Acquire SDK, which is also available under Linux. With a little adapter code, the team managed to connect the camera images to the OpenCV real-time image processing. In addition, the Linux computer performs a hardware-supported H.264 video compression of the images in order to record them for subsequent evaluation and to offer a live preview as RTSP stream via WLAN, which can be used to adjust and control the camera immediately before launch.

The mvIMPACT Acquire SDK can also be used to conveniently configure all necessary acquisition parameters. For example, the exposure is adjusted in the area of the roadway that the vehicle will travel in the next second. Also, the exposure time was limited to avoid motion blur. These settings showed the advantages of an industrial camera over the "fully automatic" consumer solution that had previously been in testing.

After the software integration, the team completed the first test drives with the camera in the fall of 2017, which still had to be temporarily attached to the vehicle for this purpose because structural changes are not possible within the season.

The race car designed for the 2018 season has now been fitted with a permanent camera mount so that camera images are recorded during all training runs and competitions. This is to generate a wealth of training images that depict the traffic cones under different lighting and weather conditions. These images will be used to make the cone detection algorithm even more robust. If everything goes as planned, the "Berlin Race Car 2018" will undertake its first autonomous driving tests with the camera from MATRIX VISION 2018.

HTW Berlin Motorsport is organized as a non-profit association. The students work in this project parallel to their studies and rely on the support of sponsors. We would therefore like to express our sincere thanks to MATRIX VISION for their sponsorship and support.