Solutions for the future mobility 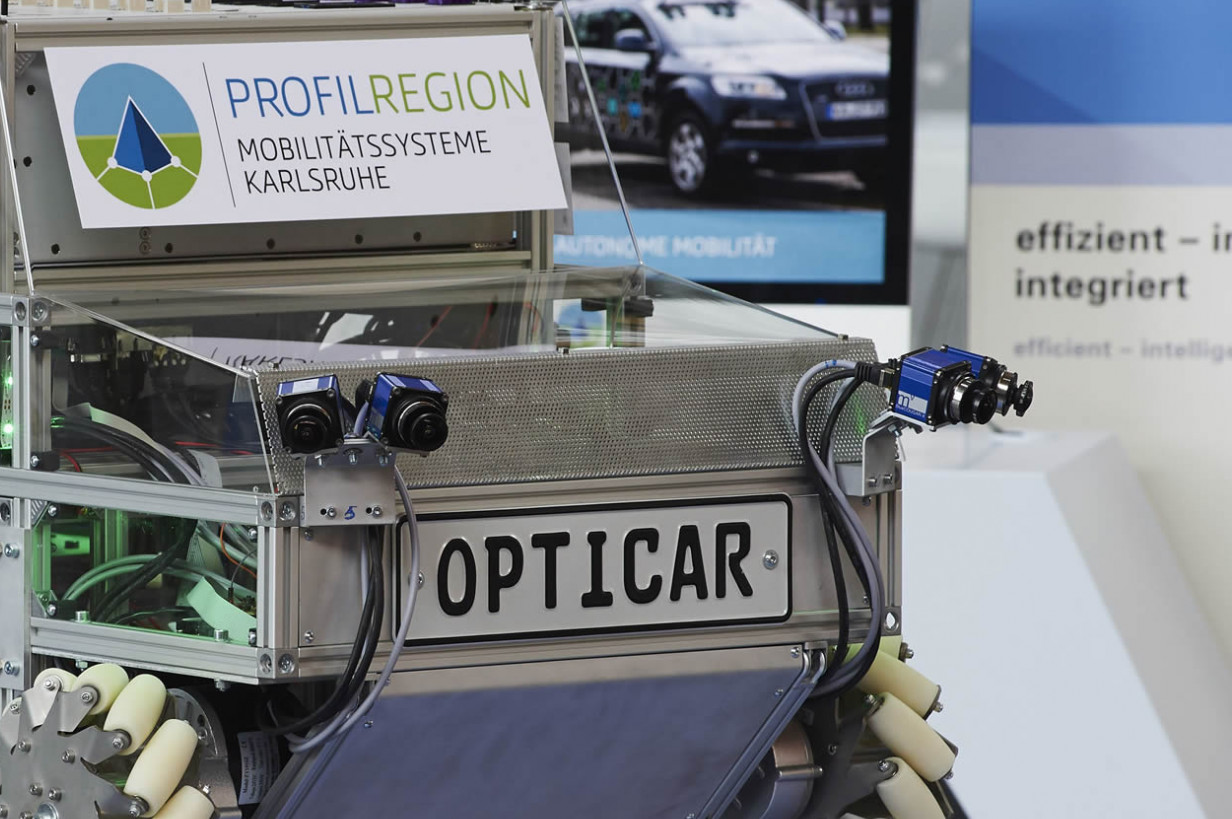 Alongside e-mobility, self-driving vehicles are very much the topic of the moment in the automotive sector. Not only is this topic firing the imagination of major vehicle manufacturers, but it is also inspiring companies, research institutes, institutions of higher education and universities not already active within the automotive sector. Even an elite university, such as the Karlsruhe Institute of Technology (KIT), is now getting involved in the action and has developed a research and testing platform for stereoscopic camera systems. For that purpose, the KIT is relying upon Gigabit Ethernet cameras from MATRIX VISION.

In addition to Lidar, Radar and Ultrasound, many different sensor-based approaches are used in self-driving vehicles. In the OptiCar, experts from the Karlsruhe Institute of Technology (KIT), from the Research Center for Information Technology (FZI) at the KIT and from MYESTRO Interactive GmbH are making use of digital cameras – wide-angled fisheye stereoscopic cameras to be precise. Stereoscopic cameras make it possible to view the environment as a spatial concept, thereby providing information regarding the position, distance and speed of objects. The vehicle, which has been developed to a scale of 1 to 4, has been fitted with six pairs of those cameras. On the one hand, these measure the immediate environment, whilst on the other hand, by virtually linking together individual cameras from various stereo camera pairs, the distance of the cameras to the overall width or length of the vehicle can be increased, thereby enabling even more distant objects to detected precisely. In this way, three-dimensional maps of the entire surroundings can be created.

The cameras being used are the Gigabit Ethernet model known as mvBlueCOUGAR-X104iC by MATRIX VISION. These colour cameras are fitted with the Sony Pregius-CMOS IMX265 sensor, which was specially developed for use in smart driving systems. For applications to be used in traffic, sensors that have the ability to cope with changing light conditions are needed. In that regard, sensors from Sony especially stand out due to their low levels of dark noise at high dynamic levels of over 71dB. The stereo cameras transmit their data via ethernet to an embedded, high-performance image-processing computer, which continually generates an overall image of the traffic situation that exists around the vehicle in real time. A particular challenge in that regard are the vibrations within the vehicle's bodywork while underway. These create a situation in which the orientation of the cameras to one another is changing constantly, thereby making it more difficult to obtain useable image data.

In order to combat this, MYESTRO has come up with a two-stage process that enables these vibrations to be detected and compensated for in real time. First of all, the KIEV Technology developed by MYESTRO is used to carry out the intrinsic calibration of the fisheye lens. Before being deployed in the OptiCar, this is achieved on a calibration rig and the results take the form of vector fields relating to the intrinsic, high-precision (<0.1 pixel) correction. The intrinsic parameters also remain stable in the presence of external influences, such as temperature fluctuations, impacts, vibrations, etc. The extrinsic parameters sometimes change so significantly, however, as to cause a decrease in measurement precision. For that reason, a type of technology dubbed RubberStereo™ will form the second stage of technology once the cameras are fitted to the OptiCar. This will enable the cameras to keep pace and to determine the relative extrinsic orientation for each image recorded. That orientation will be constantly changing due to the distortion of the OptiCar while in motion. Using the location matrices thus determined, directly matched pairs of images can then be generated for stereoscopic evaluation.

The intended use of the OptiCar vehicle is for the testing of, and as a demonstrator of new technologies for teaching purposes. With its open architecture, additional modules such as radar, maps or Car2X communication can be added, depending on specific research needs.

The fact that self-driving vehicles are what the future holds is undeniable and they are likely to result in increased safety, greater comfort and to make travelling a more relaxing experience. Having set up its Mobility Systems Center, the Karlsruhe Institute of Technology (KIT) is already in an excellent position and has set a course for the future by developing the OptiCar. In that regard, a great deal has already been achieved by industrial and research bodies. That is why it is now only a matter of time and of politics. Political bodies have now put self-driving vehicles on the agenda and intend to determine the legislative framework that will apply to their use.